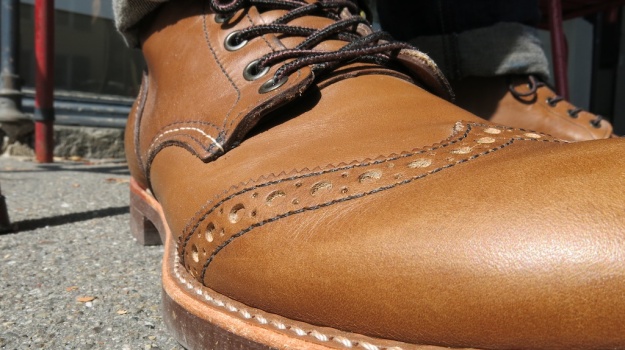 Last week I had the chance to finally see the Red Wing 8128 in the Jeanslife store in Winterthur. Roger got this model on stock since 3 weeks, quite about the same time when Red Wing Amsterdam released the info on their blog. I never liked the dark brown of the former and discontinued model and wished to have a more cognac leather. Like my Red Wing 9013 would have been perfect. The actual color of the Red Wing 8128 is hard to describe, it´s a more a  “grey brown”. Definitely a bit darker as on the Red Wing Amsterdam images.

When you search for Velva Retan Leather you find out that this leather was also used for the industrial Red Wing Syle 952 which tells you that it´s going to be a tough one.

Another info I found what exactly Velva Retan leather is, was this:
“Pioneer: A brand of oil retan leather. Also known as Velva Retan. After the initial tanning, the leather is subjected to hot steam in a tanning drum and then shot with hot oil and waxes. The open pores absorb these chemicals until they are saturated. This leather is primarily for work boots.”

(C) and source of this info here

So what do we have now? The classic appearance of a brogue boot, made out of a though workboot leather and paired with the lightweight and hardwearing Nitril Cork sole. Sounds promising to me. 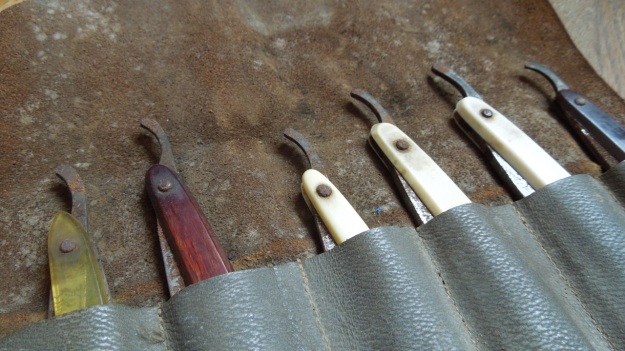 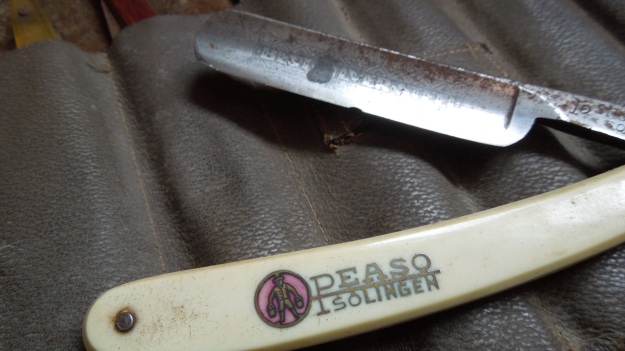 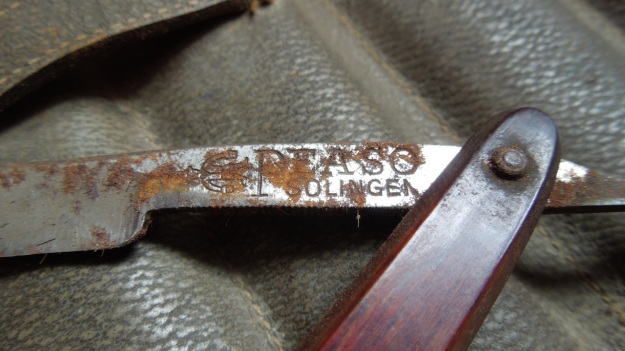 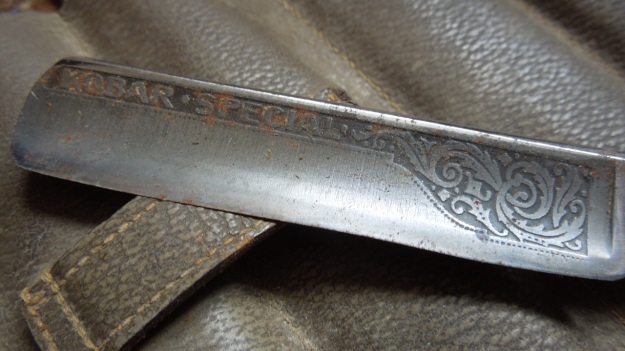 Restoring 6 rusty old straight razor blades:
Visiting the flea market on the Main in Frankfurt I bought this nice leather roll bag filled with 6 old rusty straight razors. The price was so low that even just for the leather bag it would be a find. Coming home I first cleaned and oiled the bag and after that I cleaned and removed the rust of the razors. Two of them have no hallmarks and are also quite small like a 2/8 but the others (Bockla, two Peaso, Kobar) I will resharpen and use over the time. A bit of a progress is viewable right now of the images above more will show up soon. 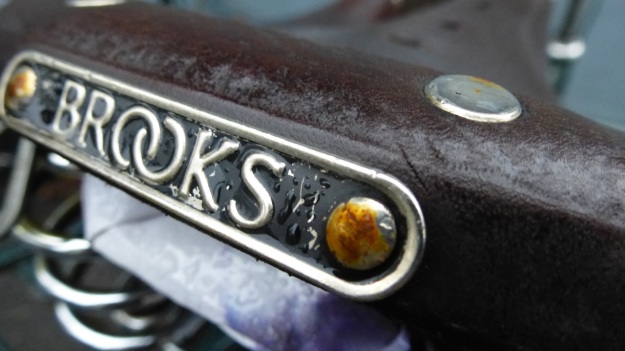 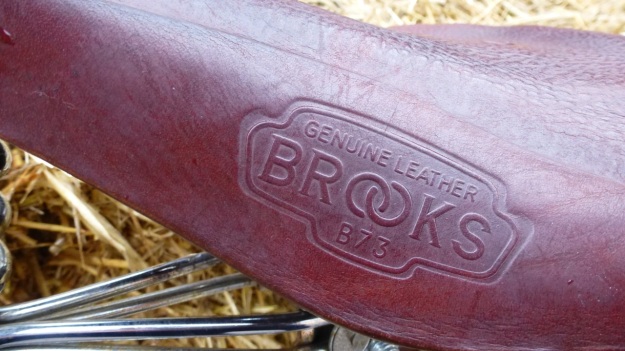 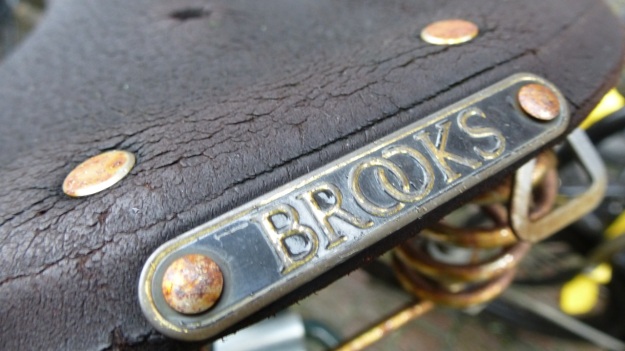 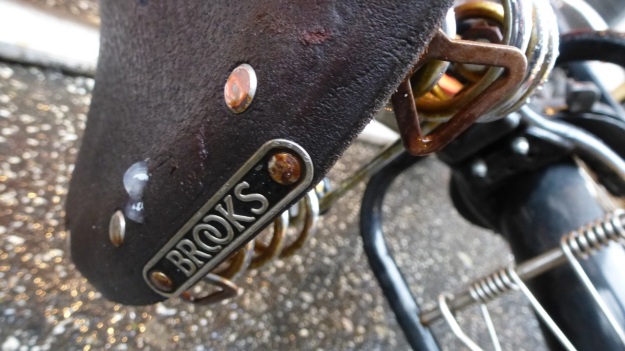 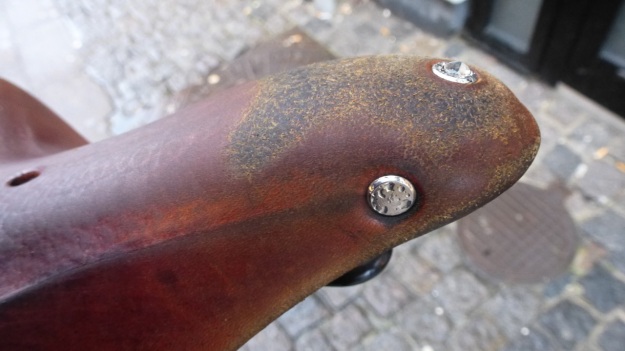 Brooks leather saddles @ Copenhagen:
Brooks leather bicycle saddles are an investment for a lifetime. They will mold to the owners shape and are nearly indestructible, that is what makes them so popular. If you see them on a bike, they tell you that it´s owner got style and understood their true value . So I was really fascinated to see that in Copenhagen they were such a common view. With so many cycling “Freaks” in this city with a natural sense for good design and well made products, it made total sense.

I was drawn more and more to take images from the various types I saw on the streets. Their different colors, leather structure and worn patterns. Some people were really puzzled to figure out what image I took with my camera. See the result of just some of the images I took above, probably I will make a large printout as a collage.

Old tools, Anchor, Heart and Cross Axehead:
On the way to Konstanz I passed by a barnsale/fleamarket and for a couple of bucks I bought this bag of old tools. Needless to say I stored it away and picked it up on the way back. Today when I started to clean the axeheads I discovered this great hallmark of a cross, a heart and an anchor.

The meaning I found is:
The cross and anchor together were first used in Christian catacombs to represent hope based on the belief in Jesus Christ. The heart was added later to represent charity. The three symbols together represent the Christian tenants of faith, hope, and charity.

I really like this special axehead and now I have to find a well fitting piece of wood for it. 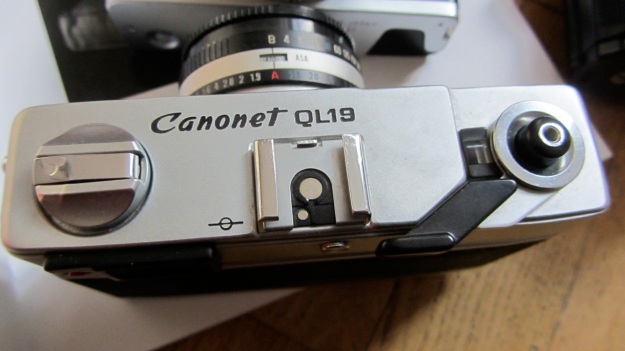 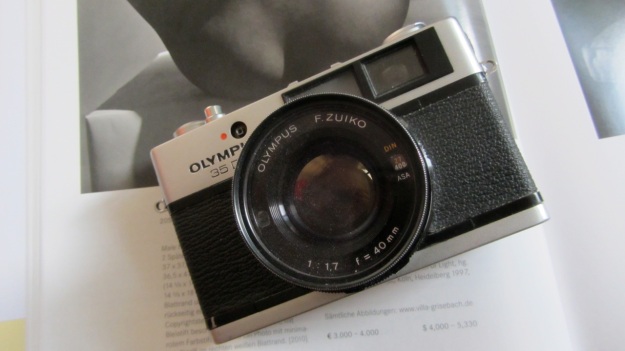 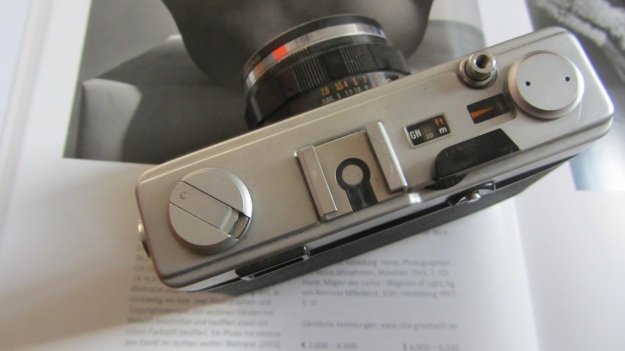 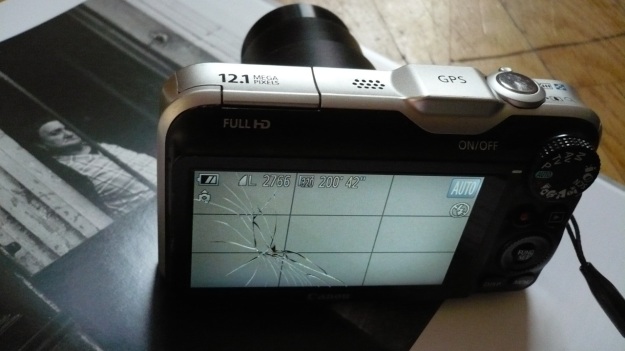 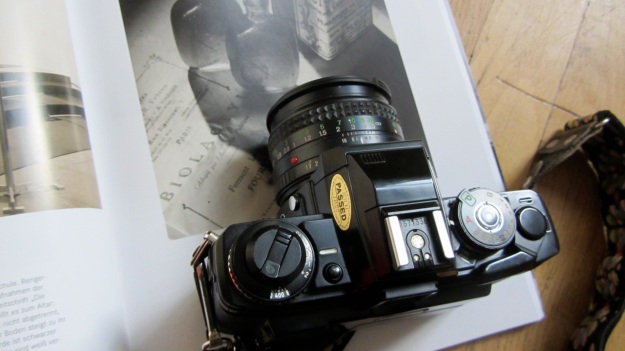 My camera collection:
I really do not collect cameras (as you can see from the dust on some of the cams) but I like some be-cause of their abilities, style and history.

First of all I like analog cameras be-cause they are made to be used and hard to kill! As you can see on pic two, I managed to break another fucking display.

Canon Powershoot SX 230 4S:
My all day companion and used for shooting photos since the Lumix TZ-10 was stolen in Morocco. The indoor and bad light abilities are better than the Lumix TZ-10 but the menus are confusing, the body is plastic and due to statics it´s a dustcatcher (and the display breaks). The next camera will be another metal body camera from the Lumix TZ-X family.

Panasonic DMC-LS70:
A substitute for a stolen camera which we bought in Mexico, crappy body, good optics, can be filled with normal batteries and tough survivor. It traveled with us 6 month to middle and south america. Still used as a backup camera.

Olympus XA:
A Lomo alternative. Some years ago quite cheap but prices are rising. One of the best and most compact cameras of its time. Just point and shoot, battery last for years and it has an integrated lens cover. My most used analog camera, great black and white images.

Canon Canonet QL19 G-IIQL – Olympus 35 DC:
I like them for their mechanics and style. I always wanted to try a rangefinder camera. They do make great images and I would say they are my poor men´s Leicas.

Minolta X-700:
My mother made with another Minolta X-700 most of our childhood photos. I repaired the family camera and bought another to not loose or damage it. I have a variety of lenses for it since they go on ebay for nearly nothing. Great camera. I shoot some of the best black and white portraits with it.

Lomo Super Sampler:
Funcam, it shoots 4 images delayed by 0,5 seconds trough every lens. So the camera of choice if you want to capture moving stuff. Great images with a creative outcome. 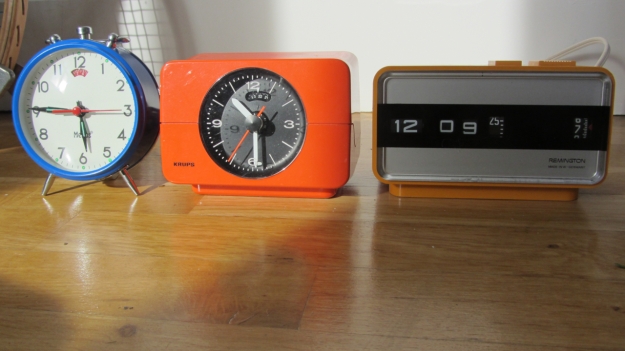 My alarm clock collection – just give me 5 more minutes!
Tomorrow I have to get out earlier than I´m used to, so I guess to post some images of my “friends” who will wake me up is more than appropriate. No honestly only the yellow Remington Rperry does his job right now.
Why?
– The Mebus alarm clock works fine, the tick-tack isn´t a real problem. More the task to wind him up once a day is a difficult one for me.
– The Krups would have been my choice, he is cool has a well done snooze trigger (just hit him). But he gets somehow quite noisy after a while a real “brrrrrrmmmm”.
– The Remington Sperry has got a illumination and an absolute annoying ring tone, and he will not stop to ring until you hit him. He wont stop until he dies so better you switch him off before you go on holiday.  The bad thing is the snooze and the stop button are next to each other. No way I would hit the right one, so I always make sure I hit both.
He is compared to the Krups ultra silent. The Instruction of the backside is amazing, they even tell you to hit him in case of a malfunction. A great detail.

To backup all of them for sure there is the mobile phone also doing his service. 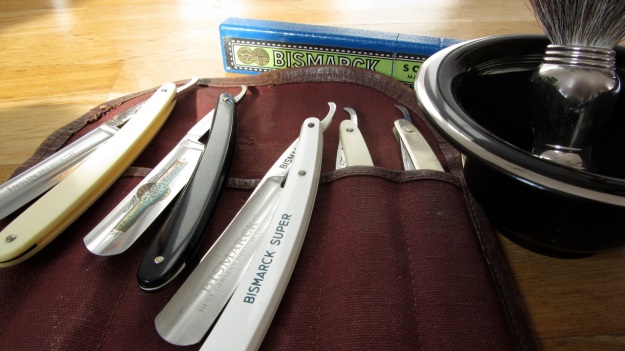 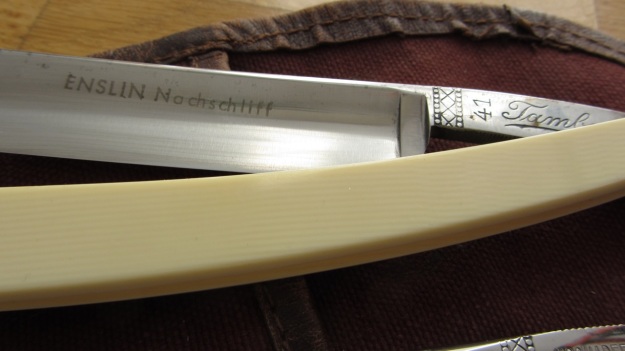 Straight Razor blades collection – and the beard had to go:
Last week I looked at my dusted razor blades and thought – are you mad at me ? After about 3 month of no use of a razor blade I decided they need more attention. Not to say that just 2 days ago I bought a comb to trim the beard. So after 5 minutes the beard was gone no major cuts, just two and honestly I really did not like my face afterwards. It looked 10 years younger.

Three straight razors are worth to be mentioned:
– Bismarck super “best german hollow ground”, a blade I bought in Bremen for fun around 1994 which I rediscoverd 2 years ago and which started the whole affection for old safety razors and straight razors blades. It is just not too sharp because it´s out of steel, so not my first choice.
– Scharff & Kober I got from someone at the nassrasur community, it was sold as ready to shave, not too sharp but sharper than the Bismarck. Nice engraving on the blade and a more classic look.
– The Tambour 41 by Robert Buntenbach. I got two of them at an antique shop in Ravensburg and they are like new. The engraving “Nachschliff Enslin” means that they have been at a master sharpener, Mr. Enslin to be sharpened or resharpened. They are the sharpest and get sharper after every shave and some treatment on the leather. Since both blades look like brand new I guess they have been sharpened and stocked but never really used. They both come from an old barber shop which closed down due to the age of the barber. The razor blade bag is also from the same source.
(If someone is interested on one of the Tambour´s I would trade it or sell it, make me an offer). 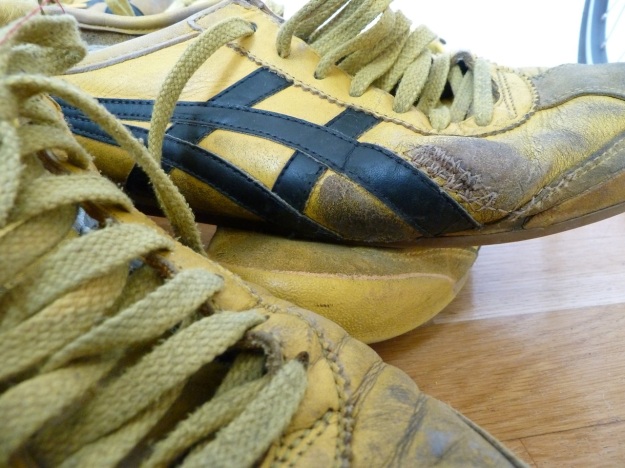 Here my collection of Asics Mexico 66 sneakers in yellow. For me one of the most comfortable and most stylish sneakers of all time. A couple of years ago the production was discontinued but right now the supply of new ones is secured.

Red Wing 1908 boots – 100 Anniversary Model:
My first Red Wing boot, a 1908 moc toe, the 100th anniversary model. Bought at Manufactum about 2 years ago. If I´m getting it right the Label say´s produced in 2005. Manufactum sold them for a great price at about 180 Euros if I remember it right. Compared to the other vintage/classic models at a standard of about 260 Euros.

Some images & videos featured on be-cause-blog have been found at various sources around the web. If you own the rights to any of these and want me to delete please contact me immediately. THX.